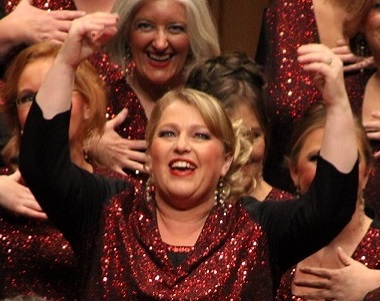 Glenda was a founding member of Brindabella Chorus in 1990, and has been directing since 1992. She has been a member of the Regional Education Faculty since 1999 and enjoys travelling around Australia visiting other choruses and quartets. She enjoys arranging vocal music, and a number of leading men's and women's groups sing her arrangements around the world.

Originally singing the highest voice part, Glenda has sung in a number of different quartets and tried every voice part over the years, but has finally settled on bass as her true calling.

Glenda has a fairly eclectic musical background. She played recorder, trumpet and organ as a child, and taught herself to play guitar and piano (badly!). She sang in school choirs and musicals and took drama as a major in high school. She has made radio and television commercials, briefly fronted a country band and occasionally still moonlights as a karaoke host!

Glenda is currently employed as an IT Trainer at the Department of Social Services, and also directs the department's choir.

She loves spending time with her family and ridiculous number of pets.

Glenda plans to be a lifetime Sweet Adeline...there is music in her soul, and always a tune playing in her head...in four parts, of course.